You are here: Home › Case Studies › Real Life Incident: Chief Officer Loses Life Because Of Internal Bleeding Three Days Later
TwitterFacebookLinkedInPinterestBuffer
A portable gangway was arranged between the main deck and the terminal with the hooked end of the gangway on the ship’s side and the roller end on shore. Once the cargo was loaded the deck crew began securing the portable gangway for departure.
In order to pick up the gangway, the deck ratings were split into four groups. The gangway was lifted by the hose handling crane, and each group handled a guide rope attached to one of the four corners of the gangway to stabilise it once it was in the air. 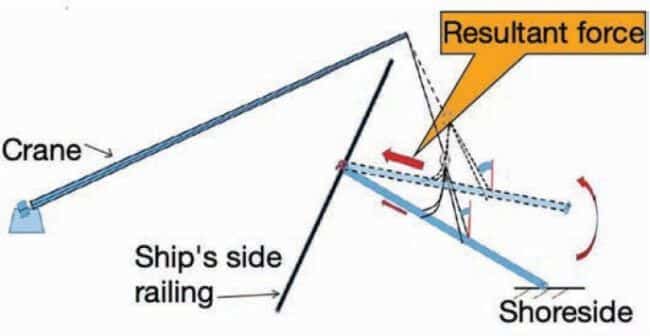 Tension was brought on the lift but the hooked end remained stuck on the vessel’s railing. As the chief officer moved closer to examine the problem, the hooks suddenly released from the railing. Because the crane’s hook, attached to the gangway sling, was not under the head of the boom, the gangway shifted inboard in an uncontrolled manner. It struck the chief officer, pushing him up against a nearby water ballast tank vent-head.
After the accident, the Master conducted a visual inspection of the chief officer’s abdomen and instructed him to take a rest. The vessel departed on schedule. The victim visited a local hospital at the next port of call and scans showed internal bleeding in his abdomen. Against doctor’s advice, the victim refused to stay in the hospital for further observation and treatment. He received some pain relief pills and returned to the vessel in the early morning of the next day.
That same day, the vessel was loading cargo at the terminal and the chief officer did not take his watch for cargo loading, instead of staying in bed due to abdominal pains. Ice bags were placed on his abdomen to ease his pain but the next day, the victim felt weak and in the afternoon his body was becoming cold. An ambulance was called but by the time the paramedics arrived the chief officer was declared deceased.
Lessons learned

How to Tackle Low Load Operating Conditions of Marine Engine?