The reduction in pitch was also observed by the third officer at the centre console. The Master was satisfied that the transfer of pitch control to the wing had been successful, and he transferred control of the steering and bow thruster to the starboard wing console.

The ferry was now making about 10kt, and the Master set the port CPP to 0% and then to 70% astern. The Master did not look at the pitch indicators at this point because he was confident he had control at the starboard wing console. However, he soon noticed that the ferry’s speed was not reducing as quickly as he expected, so he set the starboard CPP to 0% pitch. 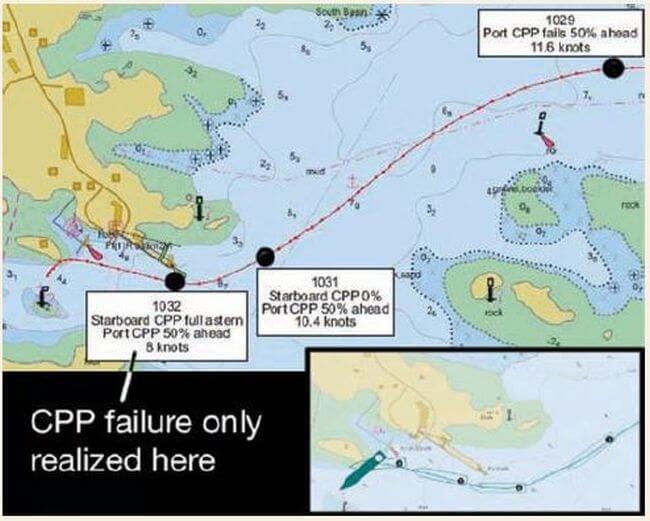 The Master initially thought that the ferry’s slow response to the pitch adjustments was due to the ferry’s trim. The OOW looked at the CPP indicators on the centre console and saw that the pitch on the port CPP was still at 50% ahead. He immediately advised the Master, who set both the port and starboard CPPs to 100% pitch astern. The starboard CPP pitch moved to 100% astern but the port CPP pitch remained at 50% ahead.

The ferry was now less than 200 metres off the pier breakwater, its bow starting to swing to starboard due to the twisting moment of the propellers. To counteract the swing, the Master set the bow thrusters to 100% thrust bow to port. At this point the Master decided against using the anchors to slow the vessel in view of the relatively high speed and the risk to the forward mooring party.

Meanwhile, the engine room was informed that the port CPP was ‘stuck ahead’. Engineers made various checks and one engineer went to place the port CPP into local control. With the ferry’s speed now about 8kt the swing to starboard had been stopped and the vessel was approximately 30 metres to the south of the pier and heading towards a set of small vessel mooring pontoons 70 metres ahead. At about this time, the port CPP pitch was set to zero using a local lever on the port shaft gearbox.

The vessel’s speed reduced to about 5kt and the ferry’s bow was swinging to port. As it did so, it ran over the outer mooring pontoons, causing some of the pontoons to overturn. Seconds later the ferry gently grounded and stopped in the water.

Some of the official report’s findings were:

Real Life Accident: Vessel Sinks Because Of Bauxite Liquefaction
Want to share your tips and advice? Got questions? Visit the community forum to ask questions, get answers, meet people, and share your tips!