At approximately 2130 on 2 April 2019, the bulk carrier Coresky OL completed loading logs in Eastland Port, Gisborne. Shortly afterwards the crew commenced securing the logs that were stowed on deck.

The chief officer was operating a crane, which was being used to tension the wiggle wire. Both able-bodied seamen were standing close to the wire to monitor its tension, when the boatswain signalled to the chief officer to stop heaving on the crane’s lifting wire. 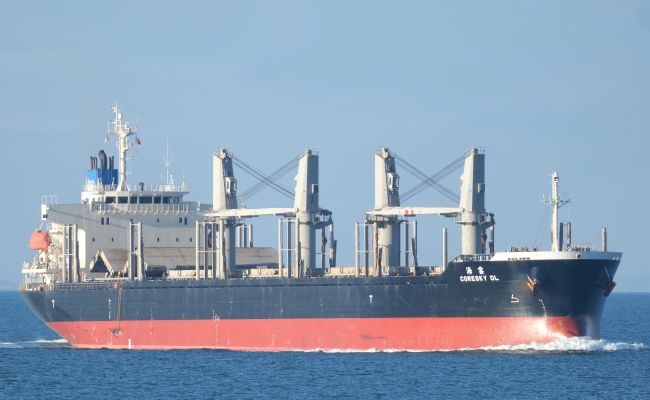 The crew did not identify the hazards associated with wires under tension and had not implemented mitigation measures prior to undertaking the operation.

The load being applied by the crane, combined with the configuration of the blocks used to tension the securing wires, was sufficient to part the foot wire.

Turnbuckles were not rigged between the wiggle wire and foot wires, which meant that the crane was used to tension the wiggle wire. This required both able-bodied seamen, whose role it was to monitor the tension being applied, to be in a hazardous area close to a wire under tension.

The operator’s safety management system did not include a safety assessment of cargo-securing operations. As a result, no information on the hazards associated with wires under tension was available to the crew, and the cargo securing manual did not provide guidance on a safe system of work for cargo-securing operations on the vessel. As a result, the Transport Accident Investigation Commission made a recommendation that Shih Wei Navigation Company Limited (Taiwan) carry out a comprehensive safety assessment of vessels engaged in carrying and securing deck log cargo. The assessment should result in appropriate procedures and guidance being contained in the safety management system and ensure that a safe system of work is established.

What we can learn

Securing logs can be a hazardous operation that should be fully risk assessed. Only then will comprehensive procedures and instructions be developed to help create a safe system of work.

Those involved in a securing operation need to be aware of the likely loads involved and the potential dangers to which they may become exposed. In addition, relevant information needs to be recorded in the cargo securing manual for future reference.

Flag administrations, classification societies, ship operators and crew members may all benefit from the information in this report.