Our tanker arrived in port and was to go to berth at the southern extremity of the port. The manoeuvre required swinging the vessel 180 degrees and then backing astern to berth port-side to. Another tanker was moored just to the north of the intended berth which restricted the manoeuvring room somewhat. The berthing plan was discussed between the pilot and the Master but the pilot had not mentioned the restricted room due to the other berthed tanker.

Although there was a flood tide and the westerly wind was blowing at 15 knots, a tug was not considered necessary. Once turned successfully, the pilot began backing the vessel; running astern with main engine and bow thruster, the wind and the flooding tide were slightly on the vessel’s port side. 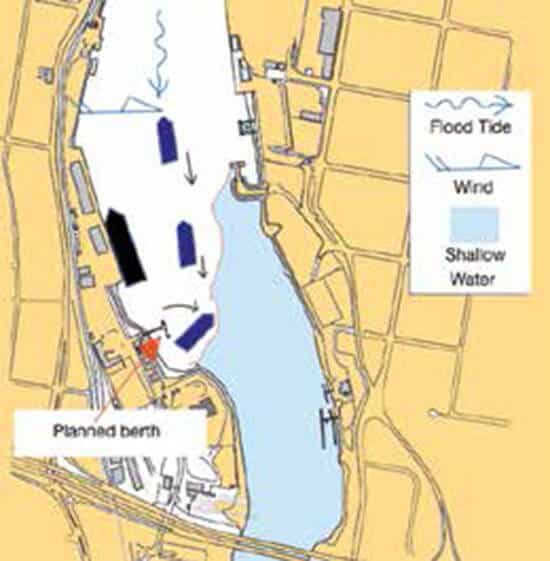 When our vessel was approximately 15-20 metres from the berth, an aft spring line was sent ashore by heaving line and secured. The forward mooring station lowered the headlines to the mooring boat but they could not be made secure in good time. The vessel was now swinging to starboard even though the bow thruster was full to port. Since the headlines were not secured at the designated bollards, and in an attempt to reduce the vessel’s swing to starboard, the headlines were sent for securing at the designated bollards for the springs, but still to no effect.

Realising the vessel was approaching shallow water, the bridge team ordered the port anchor dropped but the headlines were now obstructing the anchor’s release. By the time the anchor was finally released, the vessel was already aground; the vessel’s position almost perpendicular to the berth. A tug was promptly called and with the rising tide the vessel was quickly re-floated and properly berthed.

‘Ever Forward’ Container Ship Successfully Refloated After More Than A Month
Containers To Be Unloaded From ‘Ever Forward’ After 3 Weeks Of Being Aground
Ever Given’s Sister Vessel Runs Aground In US, Almost After A Year Of Suez Canal Incident
Captain Sentenced To Three Years In Prison For Grounding Vessel