Real Life Accident: Due to the poor weather conditions the azimuth stern drive (ASD) tug was requested to get underway earlier than anticipated to meet the customer vessel. Normal practice is to hold station just inside the harbour entrance but prior to leaving the berth contact was made with the pilot, who requested the tug meet the customer vessel outside the harbour and conduct an active escort secured in the centre lead aft.

En route through the harbour the Master held a meeting with the crew outlining his requirements and due to the poor weather conditions outside of the harbour (Wind 7-8 with associated sea and swell) to prepare the vessel for heavy weather prior to proceeding outside of the harbour entrance. The Master requested that crew should pay out both forward tow ropes ready for use (one for the tasking and one on standby) and then secure all ropes/equipment on deck and check all watertight closings. Once outside the harbour entrance numerous waves were taken over the bow but the vessel remained comfortable throughout. 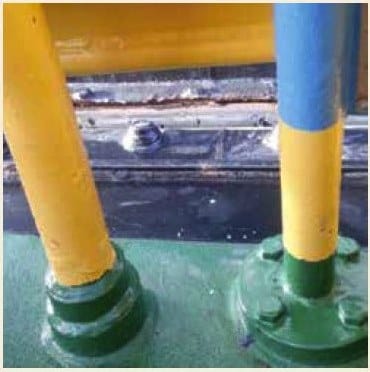 Once the towline was secured to the customer vessel, the initial part of the inward passage was uneventful, with the tug maintaining a fore/aft position with no weight in the towline. Just prior to the harbour entrance the pilot requested the tug to ‘pull back slow’. This was done without issue, and only the expected cavitation was experienced. The order to ‘stop’ was then given and the customer vessel’s speed decreased to approximately 6 knots. When in the relative calm of the harbour the pilot gave the order to ‘pull back dead slow’.

As the tug Master moved the controls astern and increased the rpm, an unexpected amount of vibration and cavitation was experienced. Upon verification it was found that the messenger line from the standby tow line was leading through a freeing port between two vent pipes, overboard and aft. The tug completed the tasking without further incident using minimal ASD thrust and rotation to minimise any further complications.

After tasking the standby tow line was fully recovered but with considerable damage found to the eye of the towline tail, minus the messenger line. A diving inspection was necessary to untangle the messenger line from the starboard pod; no damage to the pod was found. 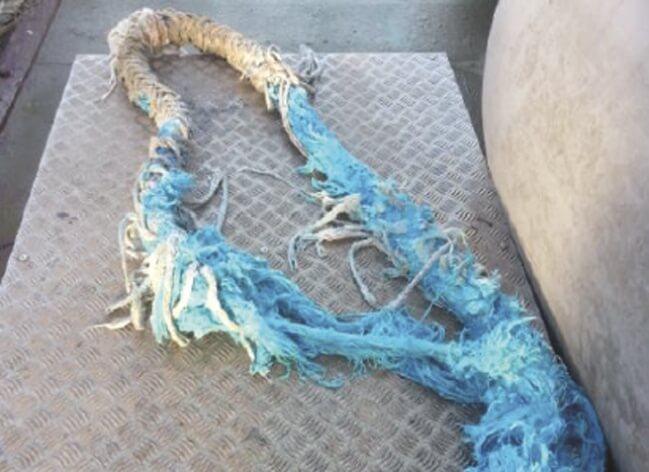 Findings of the company report

It was found that the standby towline and specifically the messenger line had not been secured. It is believed that the seas taken over the bow while on passage outside the harbour caused the messenger and tail of the towline to be washed down the deck and then overboard via a freeing port. These then became entangled in the starboard pod unit.

A contributing factor may have been the unexpected call to get underway earlier than anticipated, so that preparations had to be done while en route to the task. Ideally they would have been made alongside prior to getting underway. Passage time from berth to harbour entrance was only about five minutes, so there was an element of rush to get the tug and equipment secured.