The vessel was to berth port side to. Four crew were working at the aft manoeuvring station, two of whom had VHF radios in contact with the bridge. Two of them deployed the spring on the port side; the slack was taken in using the capstan head of the port winch. The two other crew took care of the simultaneous deployment of the two stern lines. After the eyes of the two stern lines were ashore on a bollard, the slack in the lines was to be taken in using the hydraulic winches. However, on the port winch it was first necessary to stop the spring still located on the capstan head in order for it to be secured on a bollard on deck. 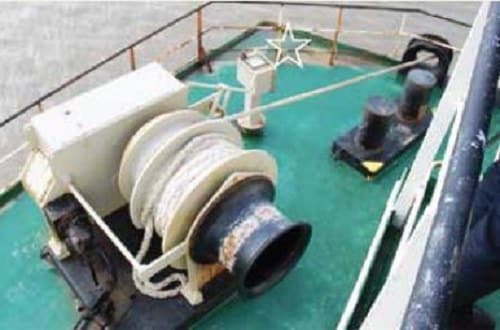 At the same time, the slack on the starboard stern line was taken in by a crewmember on the starboard side, alone and without a VHF radio (his position indicated by white star above). Initially, the crewmember pulled the slack from the line on deck by hand. After that, he began to haul in the section of the stern line now on deck with the winch. While doing this, he noticed that the slack on deck was beginning to form a loop, causing a risk of the line being mis-wound onto the drum. To counter this risk he attempted to remove the loop by kicking it with his right foot while the winch was in motion. In the process, his foot got caught in the loop which dragged him towards the hauling winch. He immediately let go of the winch’s spring-loaded operating lever, which then clicked back to the neutral position. However, due to the normal stop delay of the winch control he was nonetheless dragged nearly two metres across the deck. When the winch stopped, the loop in the stern line together with the trapped right leg of the victim had already reached the winch drum.

The winch had come to a standstill just before the victim’s upper body was brought onto the winch drum, which in all likelihood would have been fatal. Initially, the crew on the other side of the vessel were not aware of what had happened; from where they were they had no visual contact with the scene of the accident. The victim’s situation was soon discovered by two other crew who attempted to help. However, the assisting crew briefly moved the operating lever of the winch in the wrong direction by mistake, causing the victim to be pulled slightly further onto the winch. The error was quickly corrected, the victim freed and first aid applied. He was taken to the hospital where it was found that he had suffered a femoral fracture of the right leg and injuries to his back.

The crewmember risked life and limb by making an ill-considered foot movement towards a line that was being hauled in. That one and the same person controlled the winch and cleared the line being wound onto the drum simultaneously contradicts the principles of good seamanship.

Working alone in one of the two separate work areas without a radio appears to be highly problematic. For safe execution of a berthing manoeuvre, it is essential that information can be exchanged at all times between the various work areas of the manoeuvring station, but also between the work areas and the bridge, in particular.

The accident shows that it is easily possible to confuse the winch’s direction of rotation and that doing so can have serious consequences. The handwritten and only partially readable ‘label’ on the winch’s control station shows that uncertainty with respect to the direction of rotation of the winch in relation to the respective lever position apparently also existed before the accident. 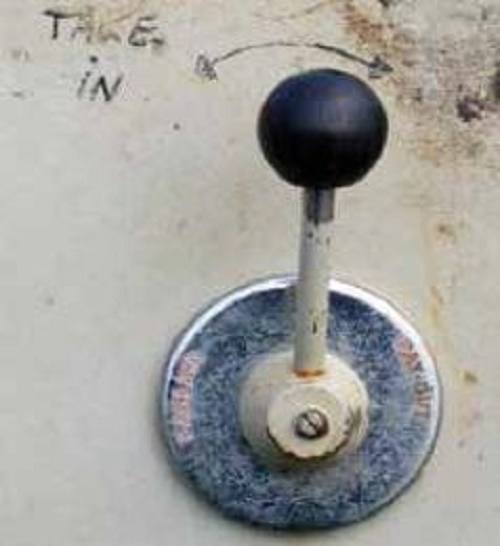 The control units of the winches on the stern of the vessel (and her sister ship) have been moved to a position further forward and each equipped with a safety cage for the winch driver.

Real Life Incident: Cruise Ship Loses Both Its Anchors Within A Day