An oil/chemical tanker was berthed at a shipyard for routine dry docking. Prior to entering dry dock, seven pallets of paints and thinners for coating the cargo tanks were received on board from the shipyard. These were stowed on the starboard side of ‘A’ deck, between the engine room casing and the accommodation. The products were stored on wooden pallets covered with plastic wrapping, with the thinner cans stored on top of the paint cans in cardboard packages. 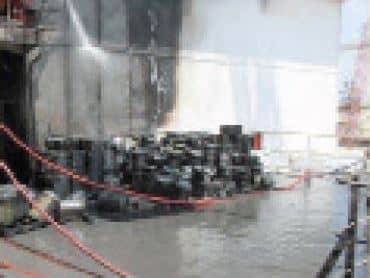 About seven days later, at lunch break, a fire broke out among the paint and thinner cans. The fire alarm was sounded and the Master ordered ship staff to assemble on the quay side. All appropriate authorities were informed immediately. Simultaneously, shipyard firemen were preparing the hoses to fight the fire. Within an hour the fire was totally extinguished but boundary cooling was continued for some time afterwards.

Although two separate investigations failed to determine the origin of the fire, it was suggested that the paint and/or thinner cans may have leaked due to expansion and contraction resulting from exposure to the elements. 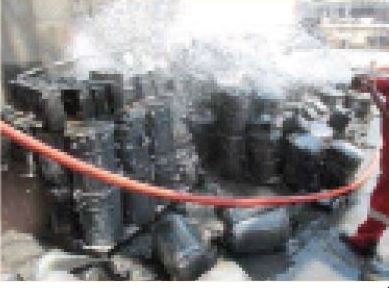 Vapour escaping from the cans was then contained within the plastic wrapping and the fire may have been caused due to spontaneous combustion. The pallets were stowed in direct sunlight and ambient temperature on the day of the incident was 25°C.

The investigation found no evidence of smoking in the area (which was prohibited). There was no hot work done in the vicinity nor were incompatible items stored nearby.