In order to attach the aft towline, the ship’s messenger line was lowered through the aft centreline Panama fairlead to the tug. The mate of the tug received the line and tied it to the tug’s messenger line which was attached, in turn, to the steel tow wire. The aft mooring team on the cargo vessel took up the slack in the messenger lines and attempted to heave up the tow wire by hand.

The tug’s mate realised what the cargo vessel’s crew were trying to do and indicated to them, by shouting and using hand gestures, that they should use a winch to heave up the tow wire. The tug’s steel tow wire was 44mm in diameter and weighed 7.8 kg/m. While the use of steel wire ropes is common, a significant number of tugs use towlines made from synthetic fibre. These materials are significantly lighter than a steel wire of equivalent diameter and strength and therefore can often be heaved in by hand.

The cargo vessel’s mooring team then decided to arrange the hauling operation as pictured below. 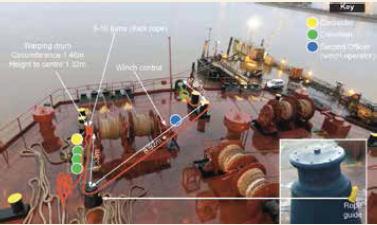 The carpenter had taken approximately eight to ten turns of the thick messenger line around the drum. These turns accumulated towards the outboard end of the drum as it rotated due to the angle of the lead from the pedestal fairlead. The free end of the messenger line then became entangled in ‘riding turns’, causing it to be heaved back into the warping drum with the part under tension. As this was happening, the tow wire came up onto the cargo vessel’s deck and the towing eye nearly reached the aft bitt.

As heaving continued, the messenger line slipped off the side of the warping drum, causing the tow wire to drop back down towards the tug. This re-occurred on several attempts until at one point, when the carpenter was standing with his head a few centimetres away from the drum, he was heard to cry out. The second officer stopped the winch and quickly moved around to the drum end. There, the carpenter was found slumped forward on the messenger line with a loop of rope hanging loosely around his neck. After medical attention at the port, the victim was declared dead due to a fracture dislocation of the cervical spine.

* Once the aft mooring team decided to use the starboard winch to heave up the tow wire, they chose, and then persisted with, an unsuitable lead for the messenger line. The messenger line not only damaged the winch’s hydraulic pipes, but also led onto the pedestal fairlead from the wrong direction. (The pedestal fairlead was designed to assist in taking a breast or spring mooring line from ashore, with the line exiting from the pedestal on its inboard side.)

* The aft mooring team did not follow the recommended practice of taking only sufficient turns on the drum to get traction (normally 3-4 turns), and backing up the tail of the messenger line as it payed off the drum. Instead, they decided to take up to 10 turns of the messenger line on the warping drum, effectively using the drum like a winch.

* Once the eye of the tow wire had been heaved up to the bitts, some method would have been needed to hold the wire safely while the eye was manhandled over the bitts. This would normally be done by holding the wire with a stopper, but a stopper was not employed at the time.

* The arrangement of the equipment on the aft mooring deck of the cargo vessel did not provide an obvious safe method of using a winch to heave in a tug’s tow wire through the centre lead.

* The configuration for heaving up a tug’s towline onto the aft deck of the cargo vessel was poor. The relative ease and speed with which the operation of securing a tug can be achieved on better laid out mooring decks (such as that shown below) illustrates the importance of good design. Well-designed, ergonomically efficient equipment has a major role in preventing accidents by naturally encouraging people to work safely and discouraging bad practices. Conversely, poorly designed equipment, such as in this case, increases the likelihood of people taking short-cuts and making errors.

An example of good design, which in turn promotes safe practice: 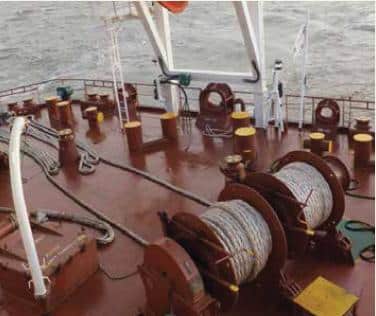