With the vessel on a northerly course, at 1430 the OOW fixed and plotted the vessel’s position, but did not calculate the predicted time for the next course alteration. About seven minutes later a radar alarm sounded indicating that the vessel was five cables south of the waypoint marking the start of the 283° track. The OOW acknowledged the alarm and fixed the vessel’s position at 1438 using GPS and a range/bearing from a nearby RACON buoy. He then continued with his chartwork, completing corrections on some newly delivered charts.

At 1441, the radar alarm sounded again, this time indicating that the vessel was crossing the northern boundary of the five cable safety corridor on the 283° track. Realising that he had missed the turn to the 283° course, the OOW came to port and steadied the vessel on a heading of 270°. At 1500, the OOW recorded and plotted a fix which showed that the vessel was significantly to starboard of the planned course; he then adjusted the vessel’s heading further to port, to 267°. 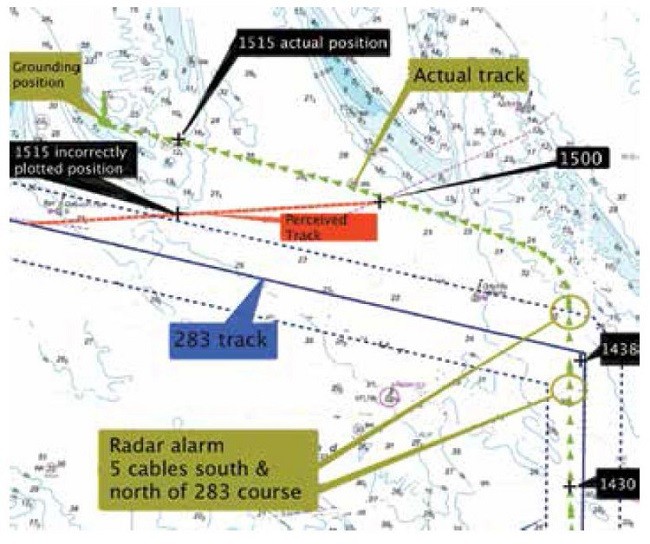 At 1515 the OOW took a GPS fix but incorrectly plotted it one mile to the south of the vessel’s actual position. At 1521, the vessel’s speed started to reduce and the bow swung to port as it grounded.

When the relieving OOW took over the watch, he did not check to identify what navigation marks would be made or the potential dangers that lay ahead. Neither did he make an assessment of the expected effects of tidal stream or wind.

When the OOW eventually altered course to port, the vessel was already well to starboard of the 283° track. His choice of 270° and then 267° were not effective in regaining track. When plotting the fix at 1515, the OOW’s unfounded understanding of the situation was that the vessel was regaining the track. As a result, it is highly likely that he plotted the fix showing where he perceived the vessel to be based on this incorrect assessment. 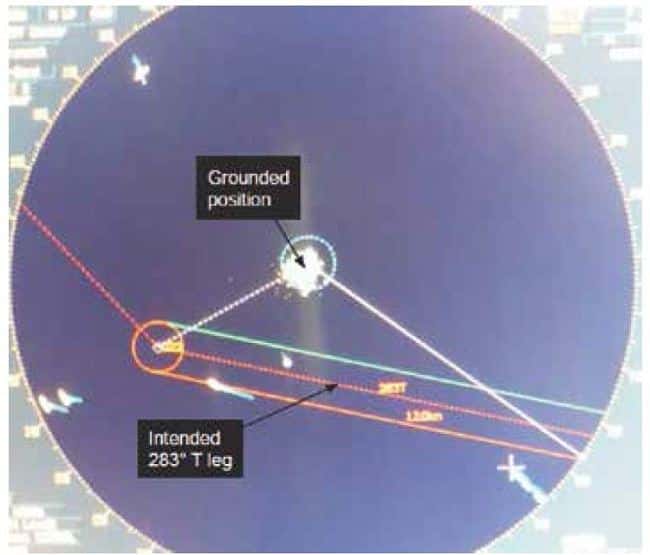 Yet, other clues that the vessel was not regaining the planned track were available. Had the OOW correlated visual observations with the chart, it would have been readily apparent that a nearby buoy on the port bow should have been to starboard. Additionally, the S-band radar and map function would have clearly shown the vessel’s actual track diverging away from the intended track as seen in the diagram overleaf.

The GPS display would also have shown the course and speed over the ground which, if compared with the course and speed through the water, would have indicated a very significant difference. During his watch, the OOW spent long periods of time at the chart table correcting and preparing the newly delivered charts. With responsibility for navigation, it is understandable that he felt a strong duty to prepare the charts for the passage ahead. However, this task distracted him from his primary role of maintaining a lookout and monitoring his vessel’s passage, and resulted in him missing the planned turn to port.

All of these factors meant that the OOW did not have continuous and accurate positional awareness.

Some of the findings, as edited, of the official report were:

Editor’s note: Good navigation results are unlikely if the OOW is preoccupied with other duties such as chart corrections. Close coastal navigation requires 100% of your focus and attention.