A bulk carrier was equipped with four cranes, each with a grab. When not in use, the grabs were normally stowed and secured on the pedestals between the cargo hatch covers, as in the photo.

For maintenance purposes, one grab had been moved off its pedestal and secured by belts and chain blocks on the starboard side main deck. As the vessel made way the wind increased in strength, becoming force 8 to 9, with wave height of about 4.5 metres. The lashings of the grab loosened and the grab shifted away from its position on deck. In order to avoid damage to the grab and the vessel, crew members were called to put on extra lashings. 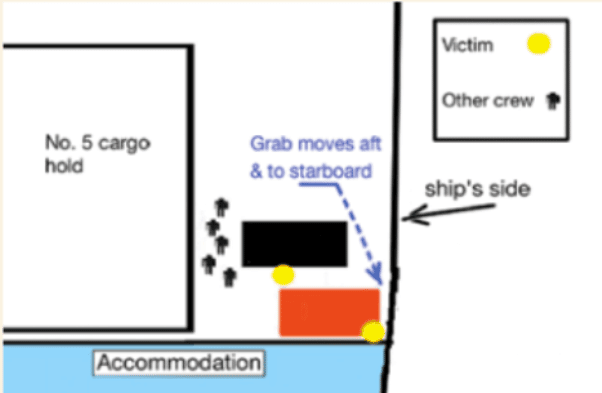 While the crew members were lashing the grab (black in diagram), a large wave washed on deck and the grab was pushed aft and to starboard. As the wave came on deck, most crew took shelter near the hatch coaming but one crew member was crushed between the grab and ship structure (position to which the grab shifted is shown red in diagram). While some crew sustained minor injuries, the victim that was crushed was later pronounced dead.