The incident occurred a few years back whilst departing port on a general cargo ship. The ship was a regular caller at this port and, being loaded to her (T) marks, the freeboard was low. The Pilot boarded at sea via the pilot ladder. He appeared to be in quite a hurry to get on board and started climbing up the pilot ladder as soon as it was confirmed to him by the 2nd Officer on deck that it was secured.

The 2nd Officer later stated that the bulwark stepladder (without it’s railings) was placed in a hurry as the pilot had already started to climb. It had not been fastened from the bottom but held in place by the 2nd Officer standing on the bottom step. Since he assumed it would be removed shortly (the river passage being about 3 hrs) he had not attempted to secure it further. 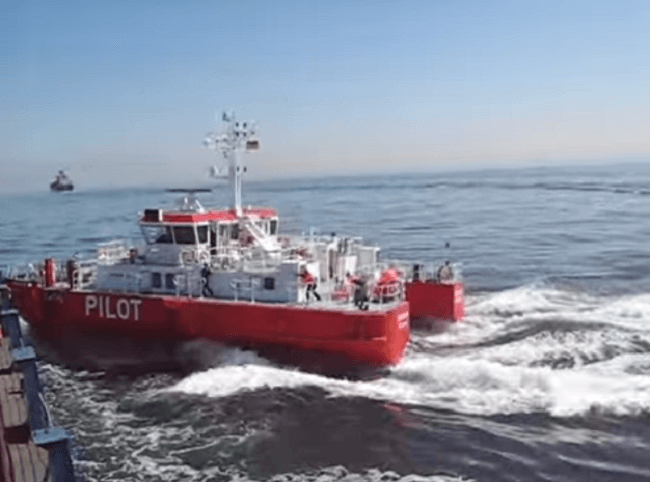 However, the leverage caused by the overhanging weight of the pilot caused it only to reduce it’s tipping momentum, resulting in the pilot losing his grip and falling onto the Pilot Boat.

It was very fortunate that the vessel had very low free-board and that the pilot boat was a small tug, so the pilot, falling only about a meter or so in height, escaped with minor bruises. The pilot went into the boat cabin, called back on his VHF and said that he was OK and for the Master not to worry. The vessel being a regular caller and pilots being friendly, no complaint was made by the pilot to the authorities.

Another common thing seen on some ships is that, at the bottom of the man-ropes, a ‘Monkey’s fist’ (a thick ball of rope) is made. This is also a dangerous practice cause, whilst the pilot is holding onto the man ropes, the pilot boat pitches and the gunwale slides down along the ship-side with the manrope(s) between the gunwale and the ship-side and the ‘ball’ gets trapped, the manrope can get stretched and the pilot’s knuckles can get caught between the rope and the ship-side, causing injury to his knuckles and can cause him to lose his grip. Again – Strictly follow the IMPA recommendations.