The second quarter of 2015 PSC inspections in Black Sea and Mediterranean PSC MoU were slightly decreased compared to the numbers of the first quarter. The same occurred for Paris PSC MoU, whereas for Tokyo PSC MoU the total number of PSC inspections was increased.

The PSC inspections that resulted in identifying deficiencies onboard vessels was decreased for the Black Sea, Mediterranean and Paris PSC MoU but was increased for the Tokyo PSC MoU. 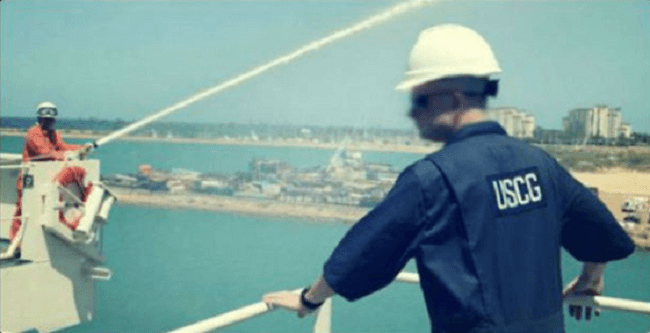 For the Paris PSC MoU area the number of detained vessels was decreased for all vessel types with the exception of Oil Tankers where 5 vessels got detained during Q2 2015. For the Tokyo PSC MoU area (Asia-Pacific region) for Bulk Carriers and General Cargo Ships the number of detained vessels was increased. On the contrary detentions for Chemical Tankers, Oil Tankers and Containerships were less during Q2 2015. 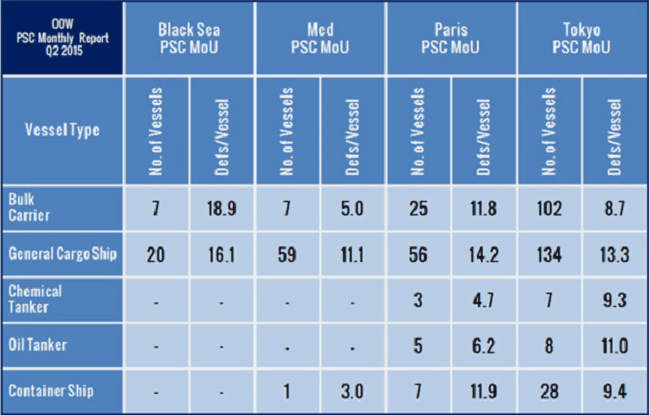 In the images below, the ports where most of the detentions took place per PSC MoU areas are being shown. These illustrations can help in giving an idea of the most “strict” ports and also highlight the importance of having a well prepared ship visiting these places. Of course it should be kept in mind that the numbers below are only an indication and an increased number in PSC detentions does not necessarily mean that a vessel has higher possibilities of getting detained if she calls to one of these ports. For example one port may have an increased number of merchant vessels visits thus the increased number of inspections and relevant detentions. 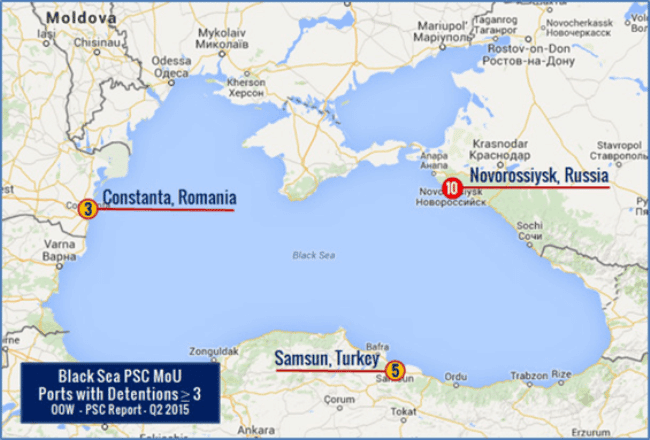 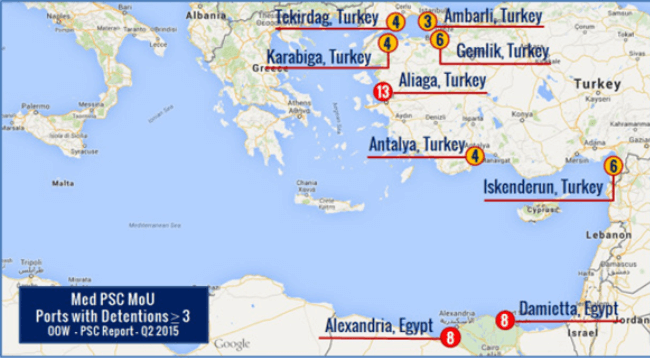 For the Mediterranean PSC MoU what is worth noting is the fact that the majority of the ports where more than 3 detentions were recorded were Turkish ports. The detained vessels in Alexandria in Egypt still remains high where 8 vessels were detained during Q2 2015. The same number of detained vessels was also observed in Damietta, Egypt. 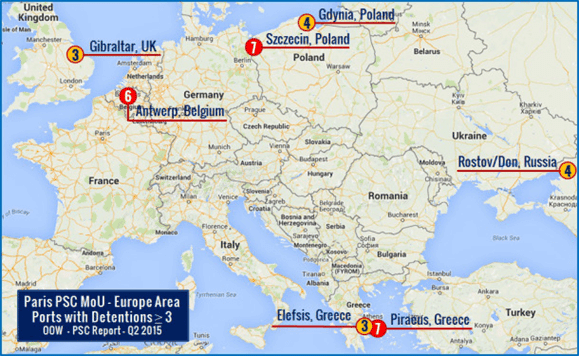 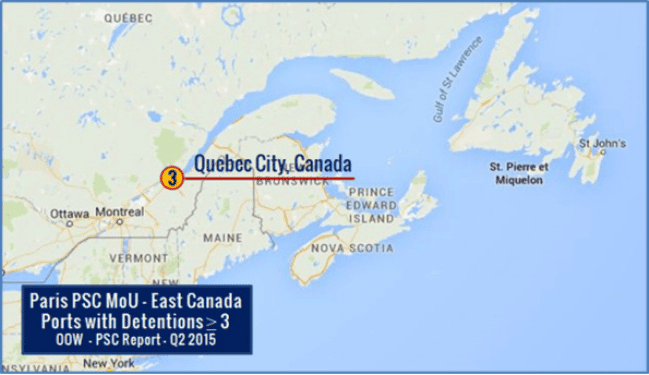 In the Paris PSC MoU area, as already mentioned above, the overall number of detentions was decreased and this was also reflected to the fact that ports where more than 3 detentions were recorded were fewer compared to Q1 2015. It is worth noting that most of the detentions occurred in the following ports: Piraeus (7), Szczecin (7) and Antwerp (6). 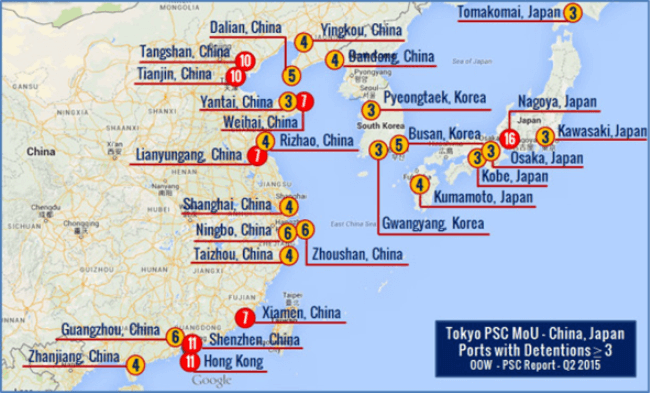 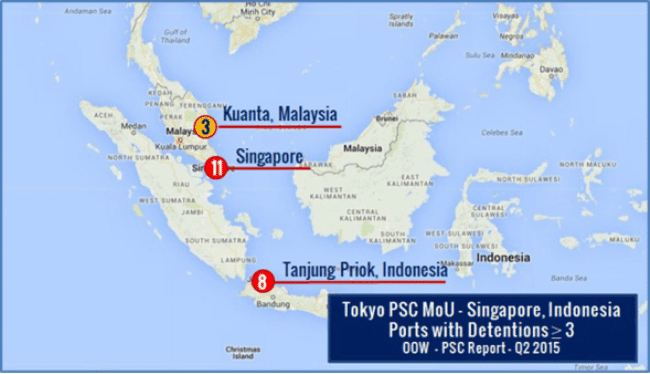 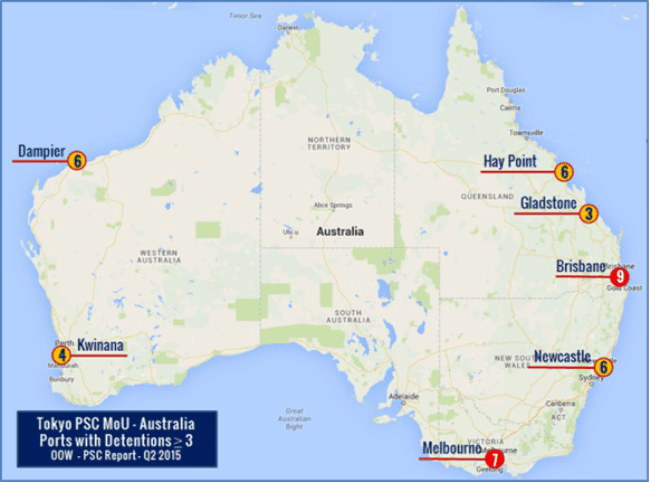 For the Tokyo PSC MoU the most notable ports where a great numbers of detentions occurred were: Nagoya in Japan, Tangshan/Tianjin/Weihai/Lianyungang/Xiamen/Shenzhen/Hong Kong in Chian, Singapore, Tanjung Priok in Indonesia and Brisbane/Melbourne in Australia. 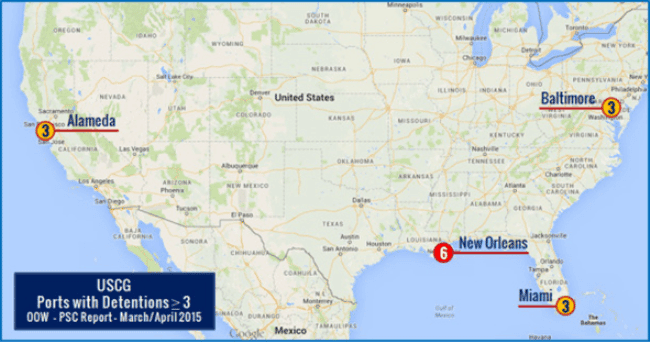 Regarding USCG, the data used are referring only to the detentions for the month of March and April 2015 since until the time this report is being released there aren’t any other data available by the USCG.

The information contained in this report have been gathered mainly from PSC MoUs websites as well as from various Coast Guard Authorities and may serve only as reference for the inspections being carried out onboard merchant vessels. The consistency of the information may differ between MoU since there are slight differences on the way each organization presents the inspection info as well as due to the fact that some countries are member in more than one PSC MoU.

The aim of this report is to highlight trends and information regarding the number of inspections that are being conducted each quarter, the number of deficiencies that are being issued in each inspection that resulted to the detention of a vessel as well as to identify the various ports where more than 3 detentions have been recorded during each quarter. Such information may serve as supportive material or as mere reference to professionals or individuals involved in the maritime industry who would like to have a quick view to the subject of PSC inspections worldwide. The report can also be found on here.

Stavros Kairis is the Founder & Developer of Officer of the Watch. He is a Mechanical Engineer working in the maritime industry. Stavros studied Mechanical Engineering in the National Technical University of Athens and he was attracted to the maritime and offshore industry from his early days at the university. His interests evolve around geopolitics, human behaviour and technology.

The article was first published at Officer of the Watch and has been reproduced with the permission of the author.