The weather was fine with light winds, a smooth sea and visibility of about 4nm. The red vessel [see image] was making way at about 12.5 knots. The pilot on the red vessel observed a radar target, the green vessel, on a radar bearing two points on the port bow at a range of 1.8 nm.

The green vessel was also visually observed to be a crossing vessel that the pilot estimated would cross ahead at 0.5nm. He assessed that a close-quarters situation was developing due to the green crossing vessel and other traffic such as the blue vessel on their starboard bow. A continuous sound signal was given from the red vessel’s whistle for about 30 seconds to attract the attention of the crossing vessel. For the time being the red vessel maintained her course (338°T) and speed. 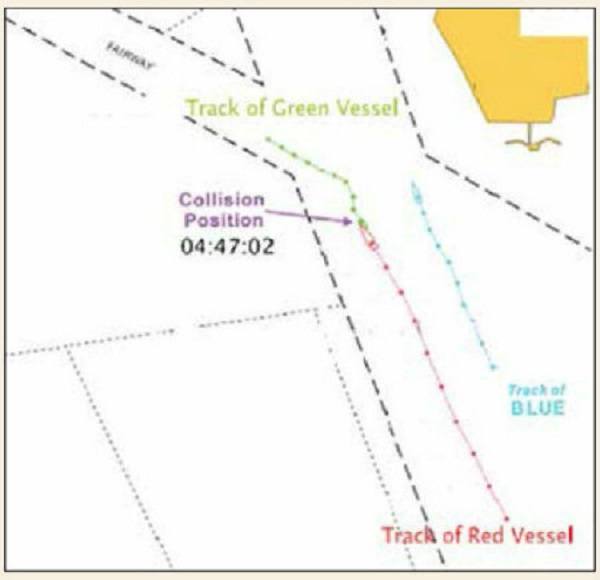 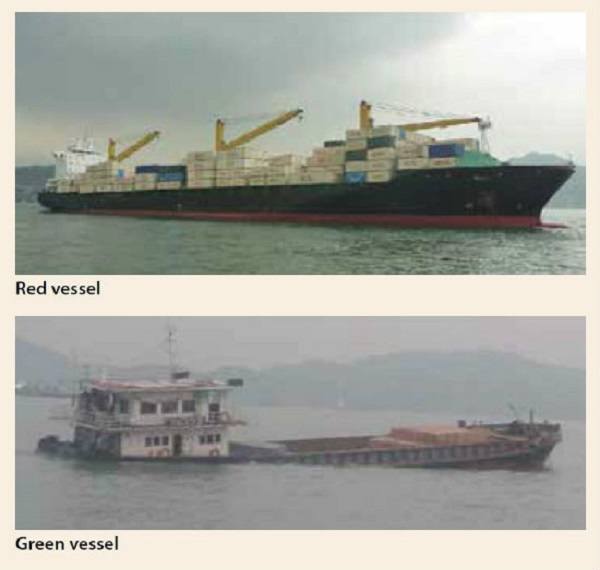 Meanwhile, on the green vessel, the only person on the bridge responsible for steering the vessel and keeping a proper lookout was the OOW. As the green vessel was proceeding at a speed of about five knots, the red vessel was observed heading north in the fairway. The OOW initially assessed that there was sufficient room for his vessel to pass clear ahead of the red vessel. Within a few minutes he realised his assessment was wrong so he altered course to starboard attempting to give way and pass clear. At this juncture the red vessel was observed to be altering course to port heading towards his vessel. In order to avoid collision, the OOW then altered course to port. Despite these actions there was a collision with the red vessel.

Following the collision the green vessel’s engine compartment was flooded and the vessel finally foundered some two hours later. Her six crew boarded the vessel’s lifeboat and were rescued. The red vessel sustained paint scratches to the starboard bow.

Editor’s comment: If you were OOW or Master on the red vessel, what would you have done, given the pilot’s action to reduce speed and eventually come to port even though they were the stand-on vessel? Not an easy situation for anyone.