The engine room crew members of a product tanker suffer severe burns from a violent oil heater explosion while doing repair work. The explosion triggers the engine room fire detection system, initiates a fire alarm on the panel at the fire control station, and also activates the local automatic water mist system. Paramedics boards the ship by launch about an hour after the accident and after rendering further medical treatment, insists on immediate evacuation of the casualties by helicopter. Eventually, after another hour, the men are winched off and conveyed to a shore hospital.

Over a period of two days at anchor, one of the two vertical thermal oil heaters of a product tanker was observed to be not firing reliably. The crew opened and cleaned the burner unit and also adjusted the igniter electrodes twice, but after the second attempt, the heater refused to fire.

On the third day, the C/E discussed the remedial action plan with the crew. They opened up the burner unit and cleaned the burner lance and igniter electrodes again. This time, the heater operated for about 90 minutes (eight firing cycles), after which it again failed to ignite. Resuming work after lunch, the electrician re-inspected electrical systems while the 3/E and cadet dismantled and cleaned the burner lance and nozzle unit, reassembled it under the C/E’s supervision and refitted it to the heater one more time.

When the test firing commenced, the 3/E, cadet and electrician positioned themselves on the top of the heater to monitor the automatic starting and firing sequence. The forced-draught fan went through a four-minute purge programme, but when the igniter sparked, there was a violent explosion.

The oil heater explosion lifted the thermal oil heater casing top, snapping most of the securing bolts. The burner arrangement was pushed out of alignment and the inspection cover was torn from its securing bolts. The ducting from the externally mounted forced-draught fan was torn apart at the flexible insert. Fuel lines running across the top of the thermal heater were deformed, and at least one began to leak from a weakened joint. The explosion triggered the engine room fire detection system, initiating a fire alarm on the panel at the fire control station, and also activated the local automatic water mist system.

The three persons on top of the heater suffered burns over large portions of their bodies as the flame front engulfed them momentarily, but they were able to walk from the area to the accommodation. They were assisted by the mustered crew, who removed the remnants of the burnt coveralls and ill-advisedly pierced and drained (lanced) the blisters before placing dressings on the burns. The injured persons were also given painkillers and water to drink but remained seated in a cabin despite being in severe pain and trauma.

About half an hour after the explosion, the Master reported the incident to the port control and his local agents and requested medical assistance. Unfortunately, his request for helicopter evacuation (medevac) was initially denied due to the mistaken assumption ashore that helicopter operations over a tanker that had just suffered an explosion would be hazardous. Subsequent miscommunication between the response teams on shore added to this delay.

Paramedics boarded by launch about an hour after the accident and after rendering further medical treatment, they insisted on immediate evacuation of the casualties by helicopter. Eventually, after another hour, the men were winched off and conveyed to a shore hospital.

1 The burner nozzle had been incorrectly assembled, probably during the several investigation and repair attempts. As a result, the needle valve stem became bent and due to an improper seal, the circulating fuel continued to spray into the furnace during the pre-ignition start sequence;
2 The crew, except the C/E, had very limited experience in servicing this equipment;
3 The manufacturer’s manual was poorly written, and lacked a clear drawing of the burner, details of spare parts, instructions for troubleshooting, servicing, inspection or testing;
4 In order to reduce maintenance costs, at some time prior to the incident, the company had approved a change of fuel from heavy fuel oil (HFO) to marine gas oil (MGO) for the heater, but the crew failed to make the necessary changes to the fuel pre-heating circuit and the auto-start programme;
5 Excessive diesel fuel entered the furnace which was probably at about the operating temperature (about 160 °C), and instantly vaporised (flash point ≈ 68 °C) and formed an explosive mixture with the charge air;
6 The crew failed to refer to the proper sources for advice on the treatment of burn injuries, resulting in the casualties being given inappropriate first aid (especially the deliberate puncturing of blisters);
7 The port’s contingency plan for responding to a vessel casualty and medical emergency in the anchorage lacked detailed documentation that would have ensured reliable information exchange among the concerned parties. 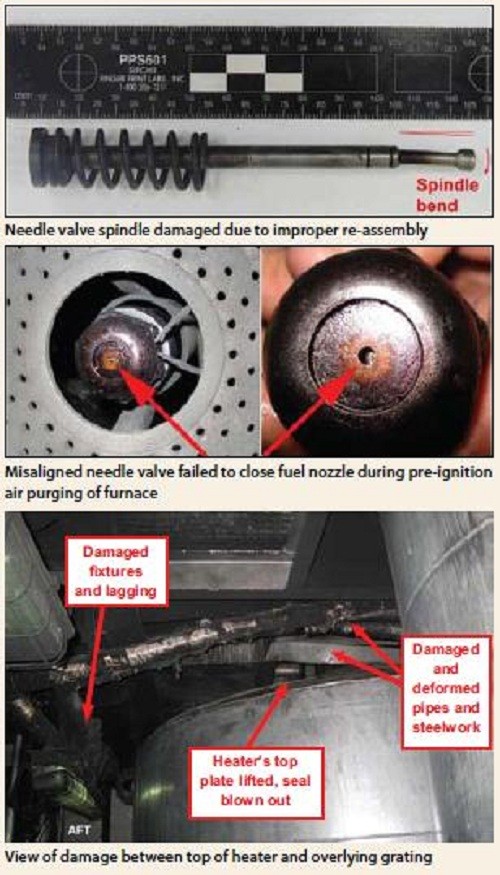 1 The ship’s operator renewed the burner units for both oil-fired heaters and altered the control system to better suit the fuel being used and the load demands placed on the heaters;
2 The heater’s makers reviewed and amended relevant sections of the equipment’s service manual and relayed the incident details to ancillary equipment suppliers, including the burner equipment manufacturer;
3 The port reviewed the emergency contingency plan and implemented revised procedures, including training, drills and exercises for its staff.

1 Ship’s crew must remain vigilant to safety even when conducting repeated or seemingly simple tasks;
2 Manufacturers must provide comprehensive and accurate documentation for onboard service and maintenance and the crew must follow these along with the more generic procedures given in a ship’s SMS;
3 Manufacturers should conduct research and implement engineering solutions to resolve potential design weaknesses that may lead to failure or hazardous conditions in service;
4 It is desirable that critical items of equipment are serviced by specialist shore-based technicians, but if this is impracticable, ships’ crews must be given appropriate training arranged by the makers or suppliers of such equipment;
5 In case of illness or injury on board, ships’ crews must first refer to the approved publications carried onboard, if required, supplemented by correct radio medical advice obtained from shore. They must be capable of providing immediate and appropriate first aid. Burn injuries should always be immediately cooled, under clean, cold running water, for at least 10 minutes.

The Role of General Average in the Maritime Industry
Video: Heavy-Lift Crane Collapses On Offshore Vessel In Germany
What is Ship Collision?
Ship That Suffered Explosion In Gibraltar Repaired, But 2 Crew Membered Still Critical