An able seaman onboard a general cargo vessel was found dead in his cabin during the voyage. Four days previously, the vessel had loaded a grain cargo which had required in-transit fumigation.

A fumigator-in-charge visited the vessel prior to loading. He completed some checks and departed the vessel only 10 minutes later. Once the loading of the grain was completed, the fumigator-in-charge returned. Aluminium phosphide was inserted into the cargo in tablet form, employing a probe to insert the tablets into the cargo. To fumigate the cargo during the four to five day voyage, the tablets would decompose and produce phosphine gas.

Before leaving the ship, the fumigator-in-charge met with the chief officer and provided a short briefing on the hazards associated with the fumigant. In addition to some paperwork relating to the fumigation, the chief officer was provided with two gas masks, one gas sampling pump and five vials for detecting phosphine gas. The chief officer understood from the briefing that he and his crew must be alert for a smell of garlic, which could indicate a possible leak of fumigant gas.

The vessel sailed and proceeded on passage without incident. The edges of the cargo hatches were sealed with expanding foam as bad weather was expected during the voyage. No systematic sampling for the presence of phosphine gas was undertaken during the voyage. 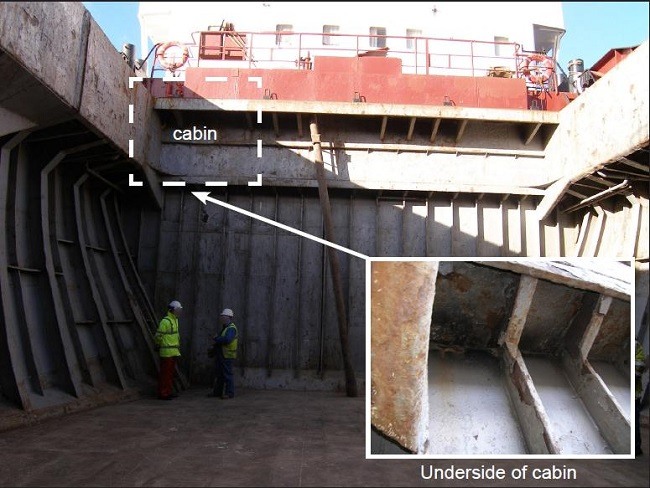 On the morning of the accident, the able seaman had been on deck securing equipment against the rough weather, and was seen in the mess room at lunch time, although he left most of his lunch. During that day, another crewman, whose cabin was on the same deck, noticed a strong smell in the corridor outside the able seaman’s cabin. However, he did not worry about it because he and a number of the crew were feeling sick in the rough weather and there was vomit in the laundry sink. At 0800 the following morning, the able seaman was found in his cabin, lying on the floor next to his settee. He appeared to have been dead for some time and all indications are that he died of phosphine poisoning.

When the vessel arrived in port, tests revealed very high concentrations of phosphine gas in the able seaman’s cabin and in the adjacent compartment. Both these spaces were sited over the aft bulkhead of the ship’s cargo hold, with their decks extending over the cargo space by 0.5m (see photographs).

Despite extensive testing, no obvious pathway was found for the fumigant to enter the cabin from the hold. It was only after the under deck area in the cargo hold had been thoroughly de-scaled that pin holes into the cabin were discovered.

Owners/operators of vessels which may be required to fumigate cargo holds should ensure:

Masters of vessels which have been fixed to load cargoes that require fumigation should ensure: