A tanker at anchor was preparing to moor a large bunker vessel on her port side to receive fuel. When she was nearly in position, (bow to bow configuration with both vessels’ sterns in line) the bunker vessel passed two stern lines to the tanker’s port quarter, where they were belayed on bitts. The lines were hove tight. Due to the absence of any lines forward, the bow of the bunker vessel canted away, causing the sterns of the two vessels to close.

Despite numerous attempts by the tanker’s crew to warn them, the crew and the bridge team on the bunker vessel failed to notice or react to the impending collision. The bunker vessel’s accommodation and quarter made several contacts with the tanker’s side shell. In order to avoid further impact damage, the bunker vessel was cast off and the fuel transfer operation was aborted. The next morning, following a review of the mooring manoeuvre and evaluation of the prevailing and expected sea conditions, it was decided to proceed with the fuel transfer operation.

Unfortunately, due to the bunker vessel’s slight residual headway, once again her sternlines tightened and drew her stern in towards the tanker, and both vessels sustained more contact damage in the stern regions. In this incident also, the bunker vessel was cast off and ordered to move away. Both incidents were reported to the office and other concerned parties, including the classification society to survey the damage. On the third attempt, the vessels safely moored alongside each other, and the bunkering operation was completed without further incident.

1 There was no evidence of fatigue as all involved were found to have had sufficient rest;
2 An alcohol test was carried out soon after the incident with negative results;
3 All personnel involved were found to have sufficient experience in ship-to-ship (STS) operations and bunkering;
4 The bunker vessel was permanently equipped with three pneumatic rubber fenders along her parallel body. They were later considered to be too small for the vessel’s size; 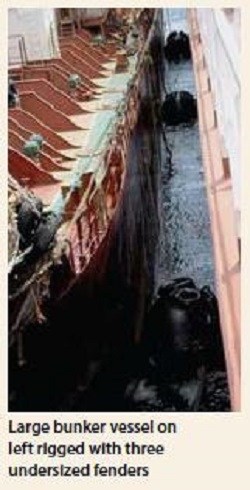 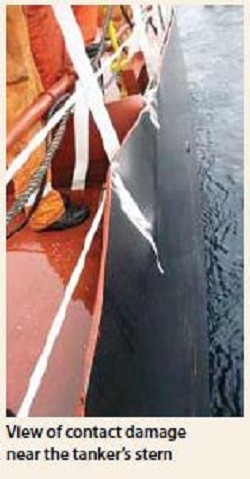 5 The bunker vessel’s mooring lines were on reels. Once tightened and the winch declutched, these prevented the crew from working the ropes quickly;
6 A replay of voyage data recorder (VDR) data showed that the bunker vessel repeatedly failed to respond to calls over the radio, especially in the critical final stages of mooring operations.

1 Substandard conditions: Inadequate equipment. Subsequent expert opinion confirmed that, considering the size of the bunker tanker, the fenders were too small and there were not enough of them, especially for STS operations in open anchorages;
2 Substandard acts / practices: Poor planning / execution of the mooring manoeuvre. The combination of securing the sternlines first, improper monitoring and residual forward movement of the bunker vessel significantly contributed to the incidents;
3 Inadequate work planning: The size of the bunker vessel required more detailed hazard analysis and planning for the mooring operation so that more effective control measures could have been implemented;
4 Inefficient communications: Apart from lack of proper discussion of the proposed mooring manouevres, there was a complete breakdown in communication between the two vessels at the most critical times;
5 System failures: Insufficient guidance in company’s procedures. It was established that the company’s procedures lacked sufficient information for this operation to be performed more effectively.

1 Procedures in the SMS revised to:
i. Enhance the safety and efficiency of STS and bunkering operations;
ii. Improve risk assessment techniques for bunker transfer from bunker barges and bunker tankers at anchorages;
iii. Provide guidelines for better mooring planning and execution;
iv. Recommend means for more efficient communications between vessels.
2 A fleet bulletin was circulated to share the lessons learnt from the incident;
3 Incident to be included in officers’ pre-boarding familiarisation;
4 An external training program in marine resources management (MRM) has been implemented for officers;
5 A fleet-wide campaign for improving behavioural safety and introducing concepts like ‘Take 5’ and ‘Stop Work’ has been started;
6 All ships provided with software for proper planning and risk evaluation for STS and bunkering operations;
7 The incident to be included as a case study in the company’s risk management training programme.