While doing pressure testing of cargo hoses on a tanker ship, the junior officer who was part of the testing team got seriously injured when the connection between the water hose and cargo hose got detached and the flailing hose coupling hit his left leg.

On some chemical tanker fleet, the annual pressure testing of cargo hoses is generally carried out by ship’s crew, ideally when the cargo hoses are being used for tank cleaning. During such an operation, with the ship at a repair yard, the cargo hose pressure test was being conducted at a pressure of 12 kg/cm2. A junior officer was part of the testing team, and was involved in documenting data and taking photographs.

Suddenly, the connection between the water hose and cargo hose detached and the flailing hose coupling hit his left leg causing a serious fracture.

Worn and insufficient threads on the water hose coupling.

The shipyard was given a letter of protest about the accident. 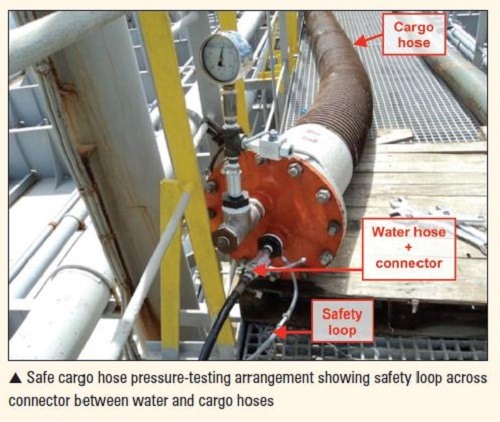 Alert issued to the fleet instructing the crew to:
i. Inspect all tools and equipment which are used for the pressure test beforehand;
ii. Attach a safety loop or lashing rope across every temporary connection in the hose and piping system to prevent them from snapping back;
iii. Keep away from snap-back danger zones;
iv. Locate and monitor devices such as pressure gauges which are within a safety zone.

Want to learn about cargo operations and equipment on tanker ships? Checkout our ebooks below:

1. The Ultimate Guide to Cargo Operations for Tankers

2. The Ultimate Guide to Cargo Operation Equipment for Tankers