The French company EXOCONCEPT has recently designed and revealed an ingenious jet ski. Named ‘EXO’, the jet-ski prototype was unveiled for the first time in the Boat Show held at Cannes, France in the first week of September 2011.

The design for EXO has been inspired by the jet-ski ‘Green Samba’, a water-ski model of the Silveira Group. Like the Green Samba, the EXO too has been designed in such a way that the users have to be prostrate on the jet-ski while manoeuvring it in the water. This is a very novel concept and has been utilised to propel the interested patrons into ordering an EXO for their water-skiing activities. 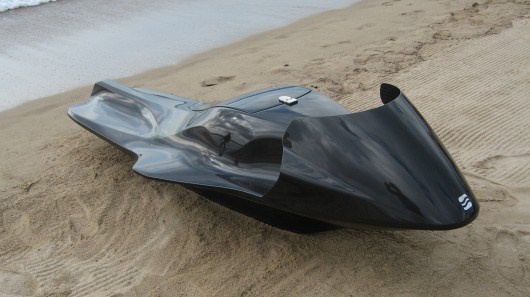 However, unlike its inspiration, the EXO does not offer high-speeding fun to its users. The jet-ski functions at a relatively sedate-yet-exceedingly effectual speed of about 50 kmph as compared to the Green Samba’s 105 kmph. Another singular feature of the jet-ski is about the options for its motor running capacitance. Depending on individual choice and potential usability, the prospective users of the jet-ski can choose between motors running at 3.5 or 4.5 or seven kilowatts (kW). Each motor offers a running capacitance that ranges from an hour to a couple of hours.

Made of lightweight fibrous carbon material, the weight of the jet-ski comes to about 48 kg, making it extremely viable when put to operational usage. This lightness in weight is not just because of the material used but also because of the fact that the batteries used to propel the ski can be removed and stored separately from the equipment. The jet-ski also comes with a 220 volts charger for the batteries.

Going by the company’s statement with respect to the jet-ski, it is quite evident that EXOCONCEPT expects a high return of favourability for its singular marine engineering concept.

What is a Kayak?